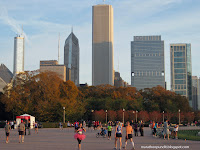 That loud thud you heard tonight was not a pile of snow falling on New York City. Rather, it was of the final collapse of Jesse Jackson Jr's political career. NBC 5 Chicago is reporting that Junior--once a rising star in the Illinois Democratic Party--has signed a plea deal with federal prosecutors.


Jackson's case is being handled by the US Attorney's office in Washington DC. While no public announcement is expected today, those with knowledge of the investigation believe the loose ends now deal with Jackson’s wife, former Alderman Sandi Jackson, and whether or not she is ultimately charged.

Under the terms of the deal Jackson signed, he pleads guilty and his fate – as to jail time – would be in the hands of a federal judge, not yet assigned.

He would repay the government hundreds of thousands of dollars – for items like the $40,000 Rolex watch, travel expenses for a woman he described as a "social acquaintance" and furniture purchased for his home.

It's likely to be a chilly Valentine's Day for Sandi and Junior.

If Junior does end up in prison--it will provide much needed balance for corrupt Illinois. Former governor George Ryan was released from prison--he'll be spending the final five months of his sentence under home confinement.